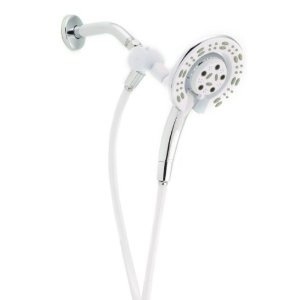 Remember Summer Camp? Remember how poor the shower heads were back then? How it was just one level up from no shower head at all, and usually was rusting, and in fact made you want to take the shortest shower possible?

But this is not really the case! I discovered that not only are new shower heads easy to install, but they are way more inexpensive than I thought! True, many home buyers will spend hundreds of dollars on a fancy shower system, but for less than $40 you can get a Two-In-One Shower System like the one above and install it in less than 10 minutes by yourself! Who knew?! I most certainly did not, but I am so glad that I took the leap of faith! For one thing without a hand held shower it’s virtually impossible to do a proper cleaning of a shower. That alone is worth the price of the new system. If you really want to keep your investment keep the old one and when you leave to move into another place you can take your new one with you!

Now I never get that “summer camp” nostalgia when I’m showering, which is fine by me!

A Little Dark Humor for a Monday!
As They Say in The Big Lebowski
Creating Space & Spring Cleaning!
Pendleton Rocks!